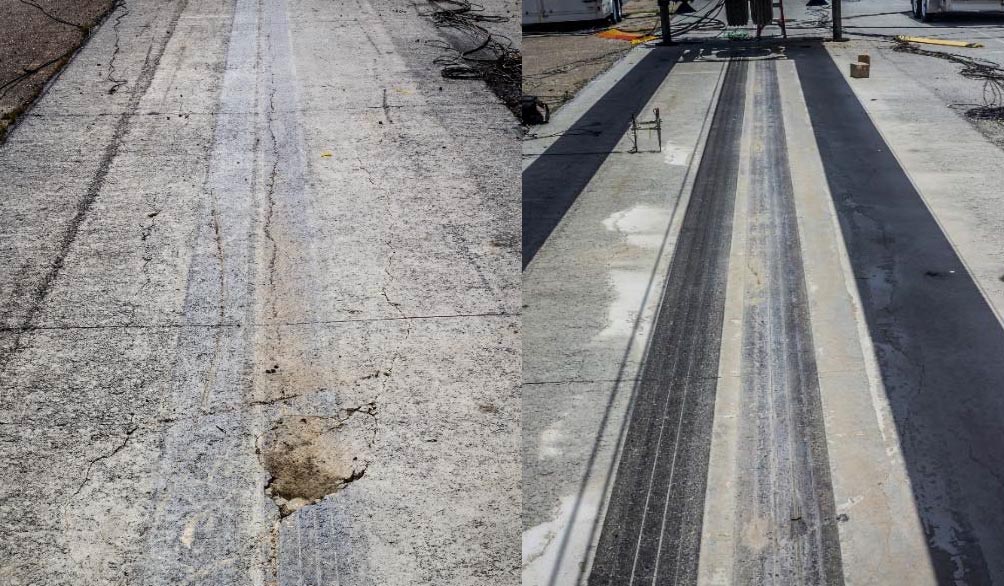 Thin Roller Compacted Concrete (RCC) pavement (i.e., the RCC thickness < 8 in.) has drawn a great deal of attention in recent years due to its potential application for low volume roadways where heavy and/or overloaded truck trafficking are often encountered. However, neither a structural design procedure nor load-induced pavement fatigue damage analysis is currently available for a thin RCC-surfaced pavement thickness design. The objectives of the study were to determine the structural performance and load carrying capacity of thin RCC surfaced pavements under accelerated pavement testing (APT), and to determine the applicability of using a thin RCC pavement structure with cement treated or stabilized base as a design alternative for those low volume roadways having frequently heavy truck trafficking.

In this study, six full-scale APT pavement sections, each 71.7 ft. long and 13 ft. wide, were constructed at the LTRC’s Pavement Research Facility (PRF) using normal pavement construction procedures. The test sections include three RCC thicknesses (4 in., 6 in., and 8 in.) and two base designs: a 150 psi unconfined compressive strength (UCS) cement treated soil base with a thickness of 12 in. and a 300 psi UCS soil cement base with a thickness of 8.5 in. over a 10 in. cement treated subgrade. A heavy vehicle load simulation device – ATLaS30 was used for APT loading. In-situ pavement testing, instrumentation, and crack mapping were employed to monitor the load-induced pavement responses and pavement cracking performance.

The APT results generally indicated that a thin RCC pavement (thickness of 4 to 6 in.) would eventually exhibit structural fatigue cracking failure under the repetitive traffic and environmental loading due to a combined effect of pavement cracking and pumping. The visible cracks first showed up on pavement surface as a single or several fine cracks along the longitudinal traffic direction within the wheel paths. The longitudinal cracks were then extended and gradually propagated to transverse and other directions under the continued loading, and finally merged into a fatigue cracking failure. Post-mortem trenching results showed that the majority of the cracks were bottom-up, but some did show developed as the top-down.

The results further showed that all tested thin RCC pavement structures over an adequate base support would have superior load carrying capability. The 6-in. RCC sections carried an estimated 87.4 million and 19.4 million ESALs to failure for the soil cement and cement treated base, respectively. The 4-in. RCC section over the soil cement base performed well with an estimated 19.2 million ESALs to failure. The data also indicated that the more substantial base (i.e., soil cement) support generally provided additional structural capacity as compared the less substantial cement treated soil base. The APT results were then used to evaluate the pavement fatigue life, cracking pattern and failure mode of thin RCC-surfaced pavements, which led to the development of a set of RCC fatigue models for thin RCC fatigue damage analysis. Finally, a thickness design procedure that includes a fatigue model suitable for analyzing a thin RCC-surfaced pavement structure was proposed and the corresponding construction cost savings when implementing thin RCC-surfaced pavement as a design option for a low-volume pavement were estimated.